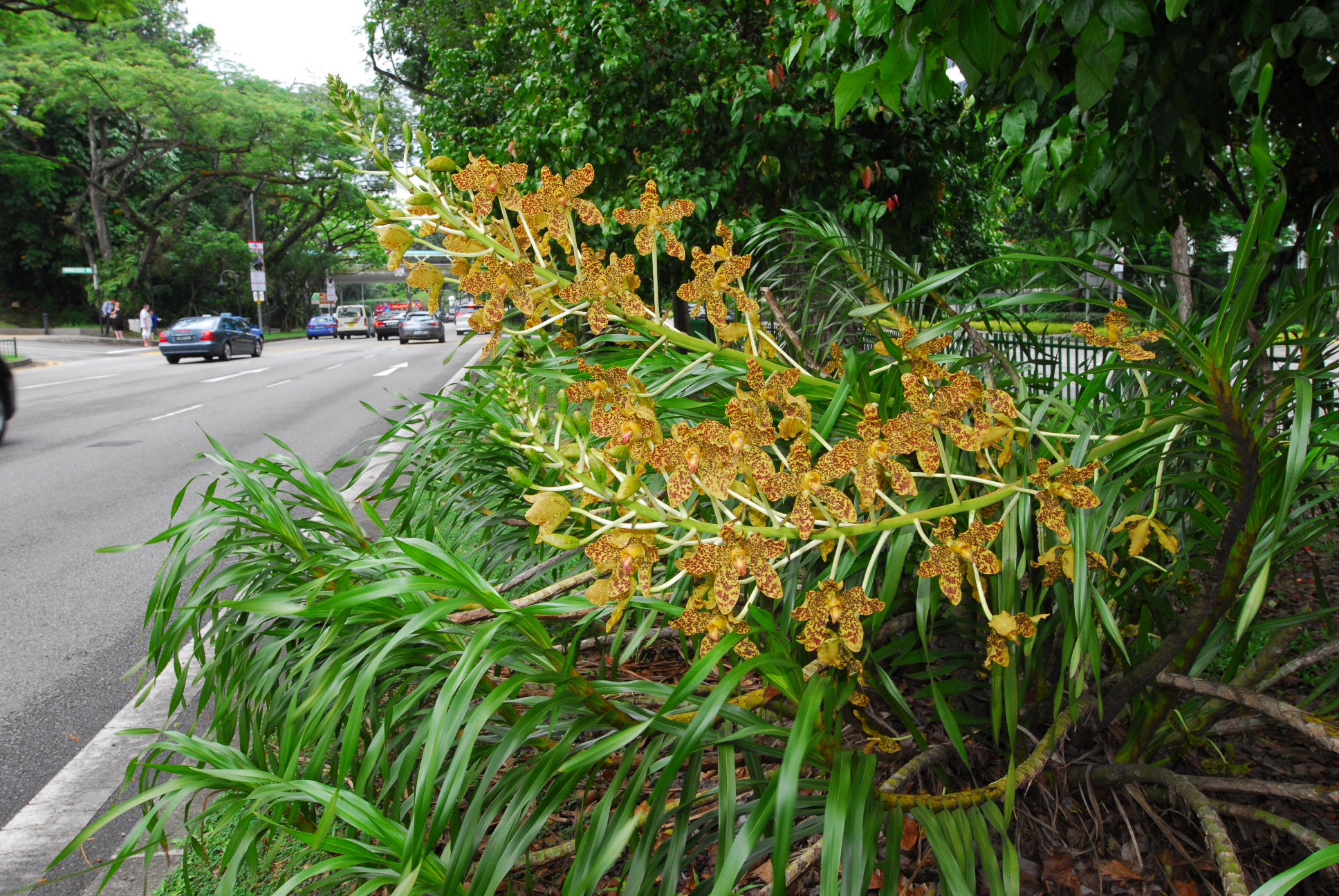 Tiger Orchids along Holland Road flowered for the first time early this year.

Did you know, in the past, more than 220 species of orchids could be found in Singapore?
Sadly, most of these have since disappeared because of development.

The natural habitats where these orchids used to thrive have been replaced by high density housing and industrial estates, roads, parks and other amenities. Fortunately, it is estimated that some 60 species of wild orchids can still be found in Singapore. Most of them grow in nature areas such as the primary and secondary forests of the Central Catchment Nature Reserve. 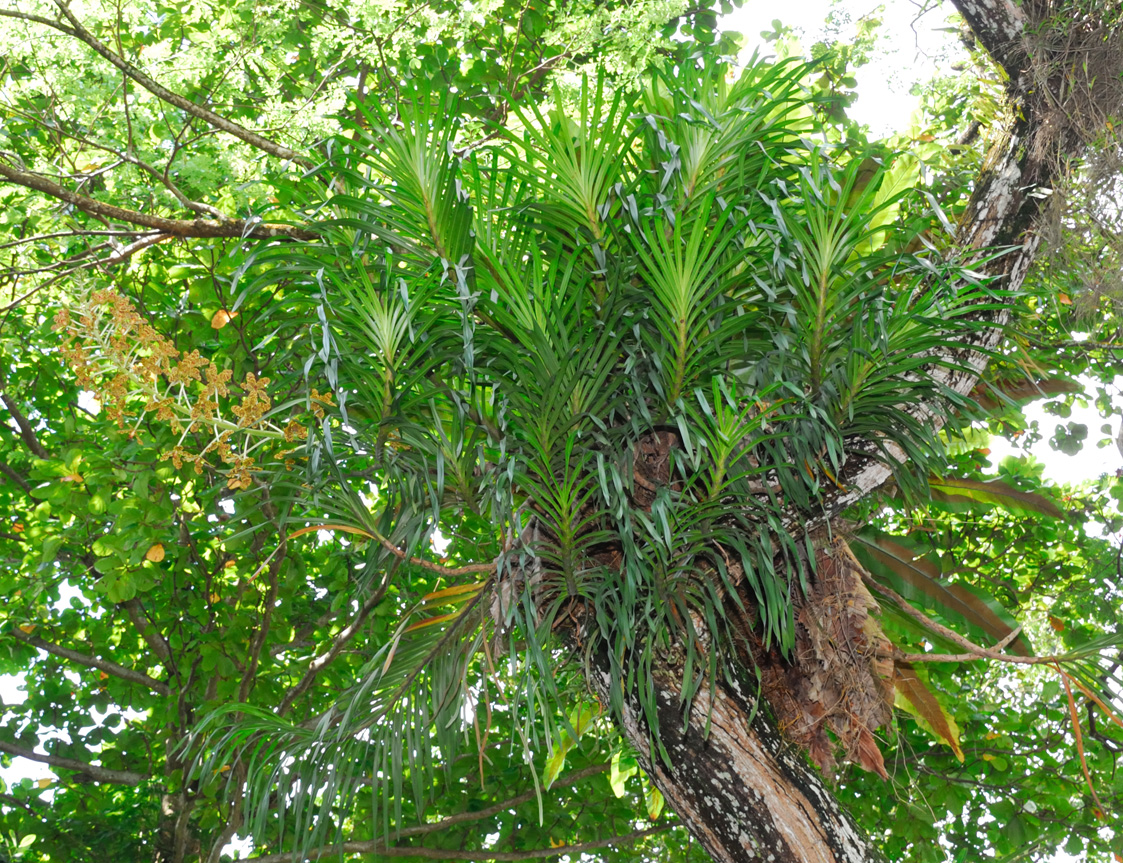 Tiger Orchid flowered on a Rain Tree along Holland Road in February 2013.

Only five of the native orchids in Singapore are common; four of which are terrestrial (Arundina gramminifolia, Bromheadia finlaysoniana, Eulophia graminea and Spathoglottis plicata). The fifth of these is the most common of all that still exist in the wild, the epiphytic Dendrobium crumenatum, also known as Pigeon Orchid. It can be found on many of the roadside trees around the island. 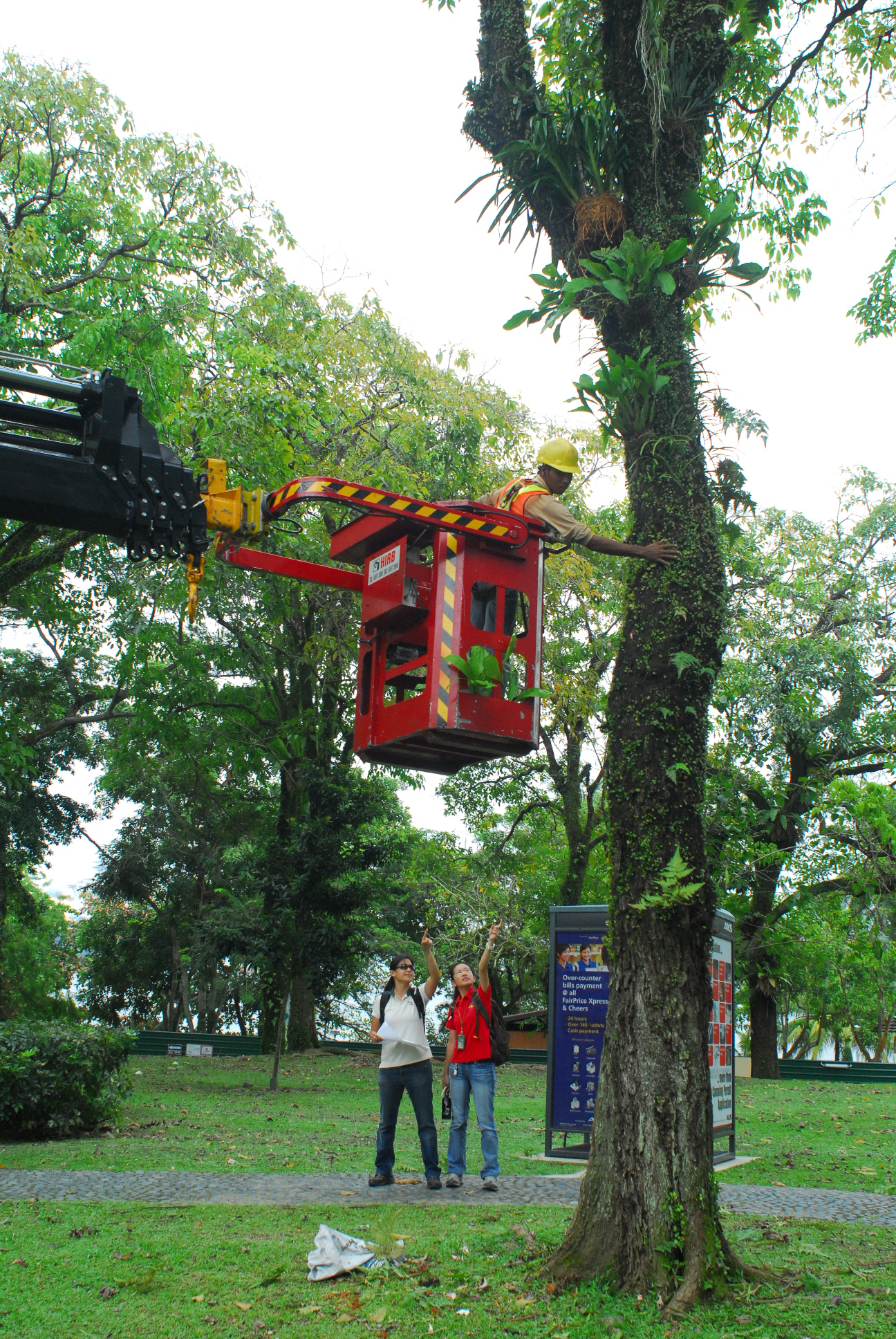 Increasing the population of native species
The Orchid Conservation Programme, which started in 1995, aims to monitor existing species, explore ways to conserve their germplasm, and increase their numbers through reintroduction into appropriate habitats, including on roadside trees, and in parks and nature areas.

First, we need to propagate the species vegetatively and by in vitro culture. Before orchid seeds can germinate in nature, they must be penetrated by a specific fungus. The chance of this happening in nature is very low indeed. Fortunately, most tropical epiphytic orchids can be germinated by in vitro culture on a defined medium. To increase the population of some of the rarer species, they are artificially pollinated, seeds are germinated in vitro and seedlings are introduced back to nature. 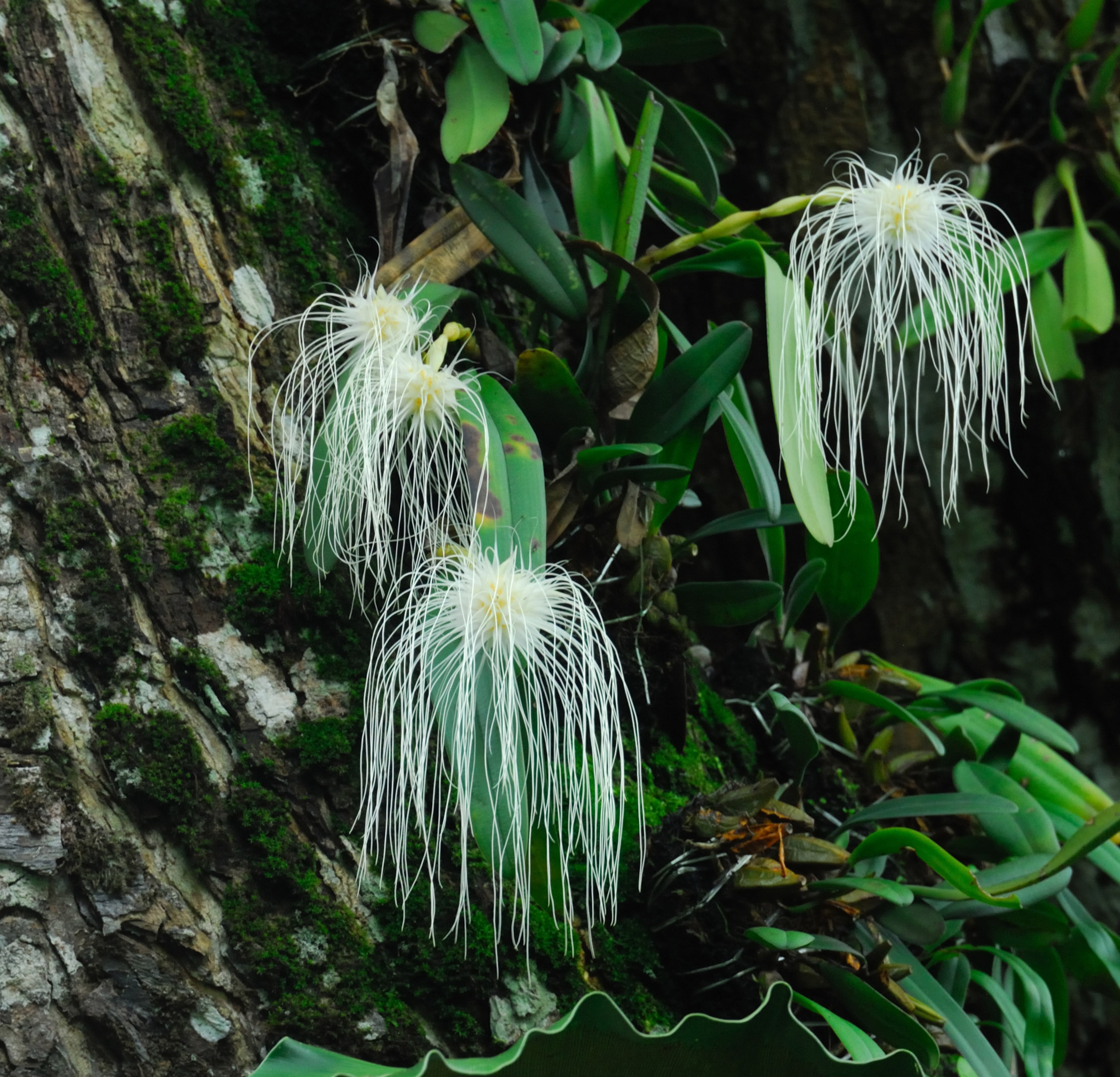 We intend to increase the numbers and varities of orchids across Singapore to more than 10,000 individuals of 18 species by 2015. 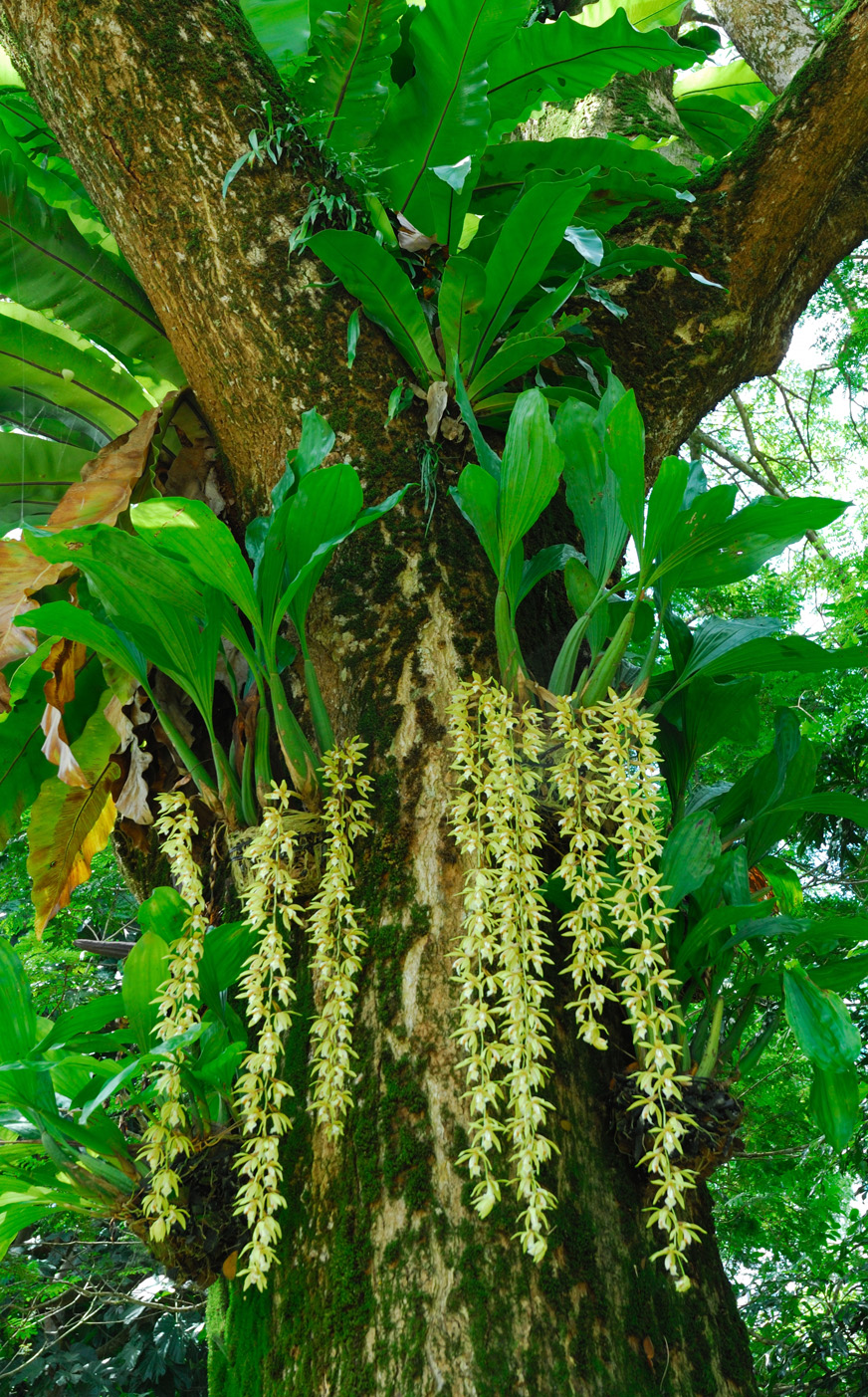 Planting native orchids in both nature and urban areas helps to enrich the biodiversity in our island-state. We are also in the process of learning how to use native orchids to landscape our parks and gardens, and to study which species are suitable for certain environments. As part of our research, we have planted a wide range of orchid species in a variety of planting sites and monitor their growth and survival rate regularly.

Success!
To date, our repopulation and reintroduction efforts have been largely successful. One of the most striking examples was in February this year, when some of the reintroduced Tiger Orchids flowered for the first time. One of them, planted on a Rain Tree, produced a long spray with more than 50 flowers. Another specimen plant on the ground along Holland Road carried 12 sprays of the large showy flowers – it was truly a sight to behold!

And we look forward to seeing more of these massive blooming in the years to come. Several reintroduced species have produced seed capsules naturally. This is an indication that pollinators are present. We hope that once these seeds are mature, the wind will dispersed them successfully into the right environment to germinate and grow. 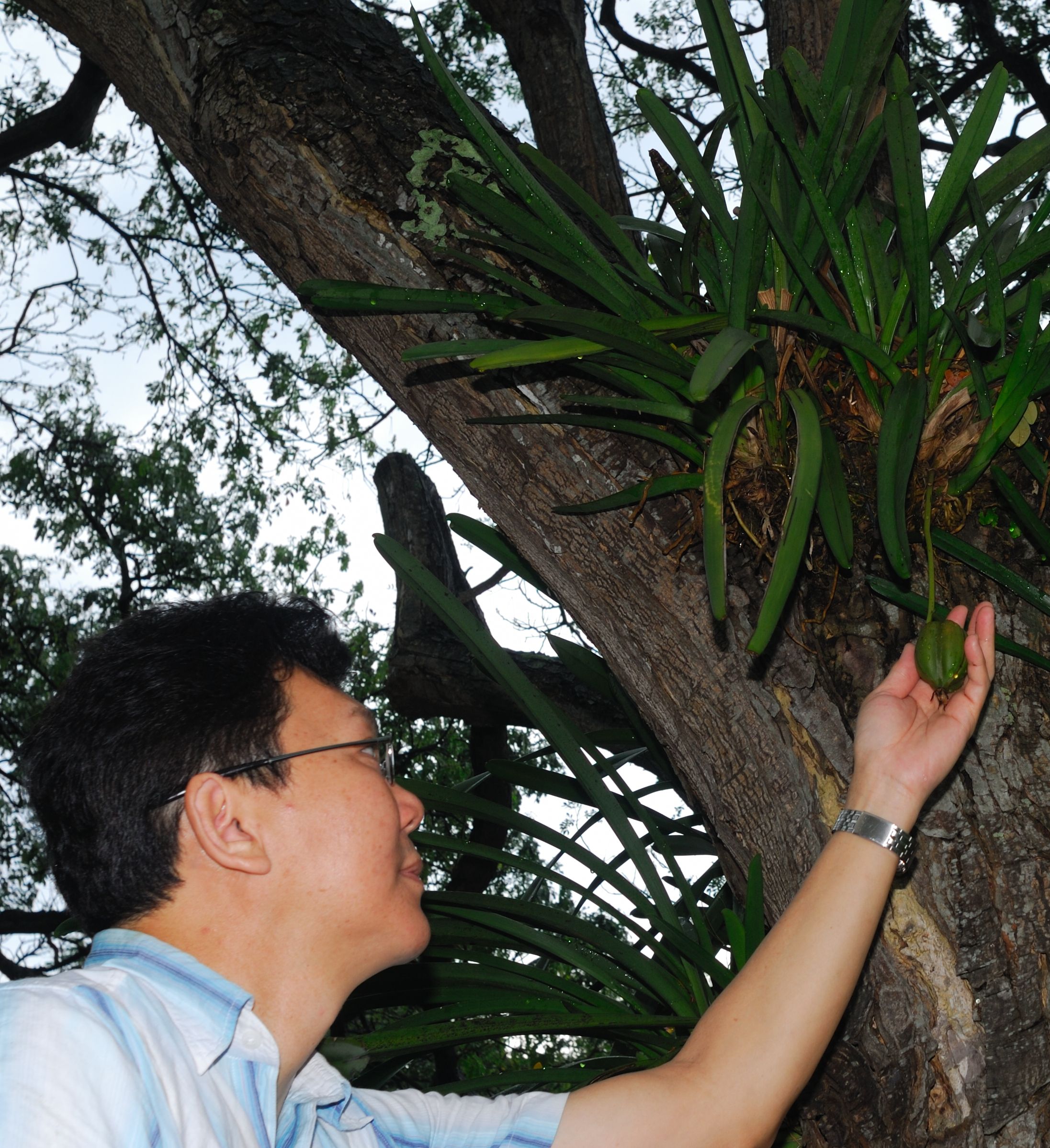 We were very excited when we discovered a Cymbidium finlasonianum we had planted on a tree along the East Coast Parkway formed fruit naturally.

If that happens, it means our native orchids are able to grow without our help, and natural populations will take root again! Singapore’s natural biodiversity will thus be richer for it.

The book Native Orchids of Singapore is now available at $8.50 at the Library Shop in the Singapore Botanic Gardens.

Author’s information:
Dr Yam Tim Wing is a Senior Researcher with the Conservation and Molecular Biology section of the Micropropagation in Research and Conservation Branch of the Singapore Botanic Gardens.

Orchid Conservation Fund
You can lend a hand in improving the survival rate of our native orchids by donating to the Orchid Conservation Fund, which was started by the Garden City Fund, a registered charity and IPC. Your donation will be used to propagate and introduce our rare and endangered orchid species back onto our streets. For information on how to contribute, visit the webpage today.

Glossary
Germplasm - is a collection of genetic resources for an organism from which new plants can be grown. Vegetative - asexual reproduction for plants, for example by cutting. In vitro – to grow plants in a controlled, non-living environment, such as a laboratory vessel.