The Secret Life Of Dragonfly Larvae Adult dragonflies – colourful, vibrant and energetic. They invoke wonder and joy for many nature-lovers visiting a wetland habitat. Dragonflies are masters of flight and skill at capturing prey in the air. If eagles, hawks and falcons are the pinnacle of predatory skills among birds, then dragonflies must surely be the insect equivalent. While adult dragonflies always leave an indelible impression, very few people know or appreciate the larvae. Living hidden below the water surface, dragonfly larvae (also known as nymphs) remain unseen and mysterious. Let us now unveil their underwater secrets.

An introduction to dragonfly larvae
Dragonfly larvae require water to survive, so female adults are always searching for water habitats such as ponds, streams and swamps to lay their eggs. The eggs are laid directly into or close to water. Once hatched, the larvae adopt an aquatic lifestyle very different from their parents. Some dragonfly larvae appear squat while the bigger ones are longish and robust.

The larvae of the damselfly, which is related to dragonflies, are mostly slender and elongated with leaf-like appendages known as caudal lamellae. These appendages function essentially as external gills. All larvae are able to breathe by sucking water into their abdomens and through internal gills. A larva can also eject the water forcefully to propel themselves for a quick escape whenever necessary. 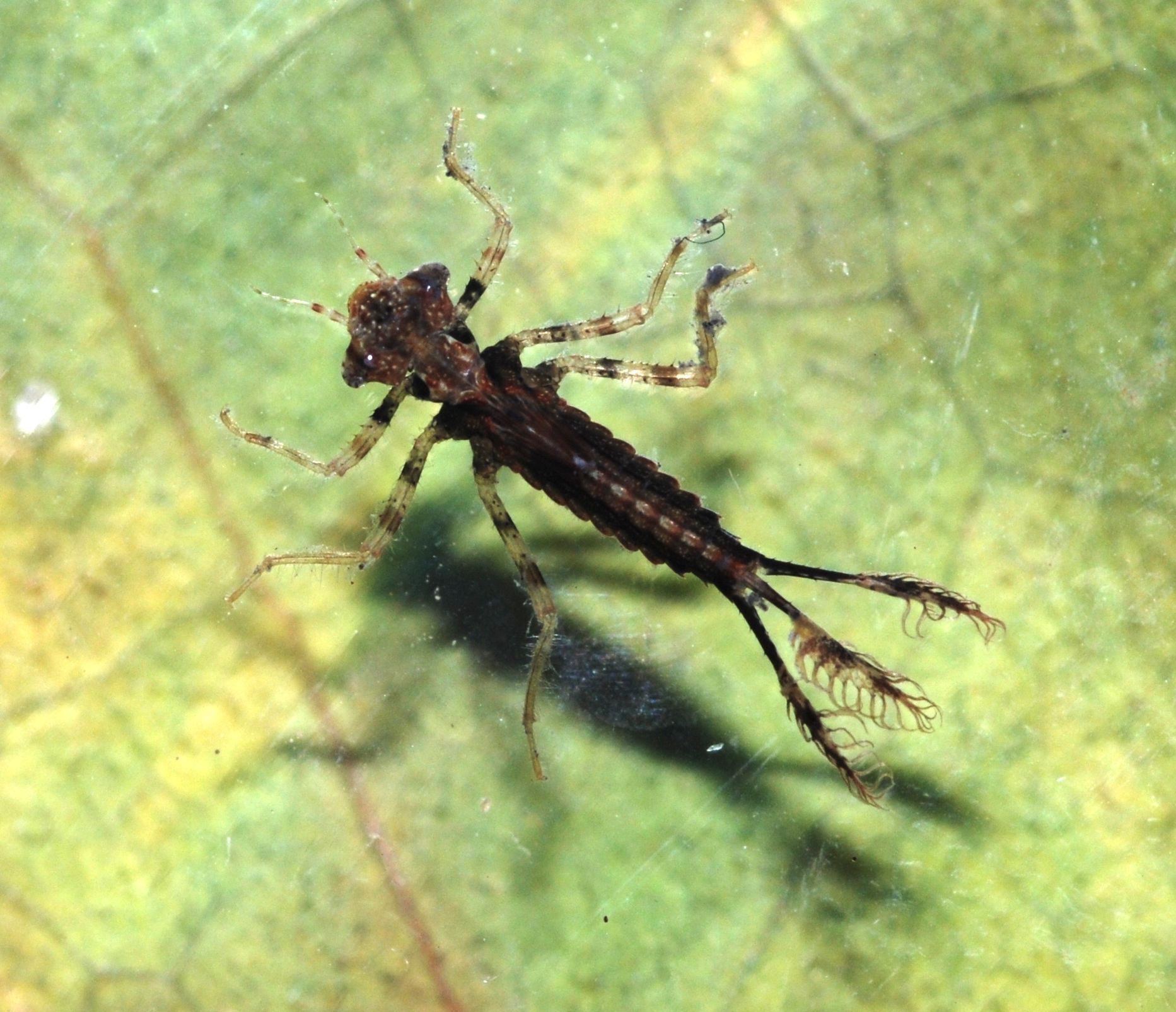 A typical damselfly larva. Note the external gills at the end of its body.

Different species of dragonfly larvae live in different water microhabitats. Some cling onto water plants floating on the water surface, some lay camouflaged among leaf litter at the bottom, while some of the rarer species in our forests even burrow into the sand beds of stream. No matter what type of water habitats they live the water must be clean and unpolluted.

They are amazing aquatic hunters
Just like their parents, the larvae are fully carnivorous. They are fierce predators of any aquatic animals they can catch. Water insects like water beetles and mosquito larvae; worms; tadpoles; and even small fishes are part of their diet. Dragonfly larvae have a unique way of catching their prey. Imagine your lower jaw is flexible and extendable, and is equipped with fearsome hooks and sharp teeth.

When a prey swims past, this lower jaw will shoot out with lightning speed to capture and retrieve it for consumption. So in this way, dragonfly larvae can stalk and ambush prey efficiently. Thus dragonfly larvae are one of the top predators in an aquatic insect food-chain. 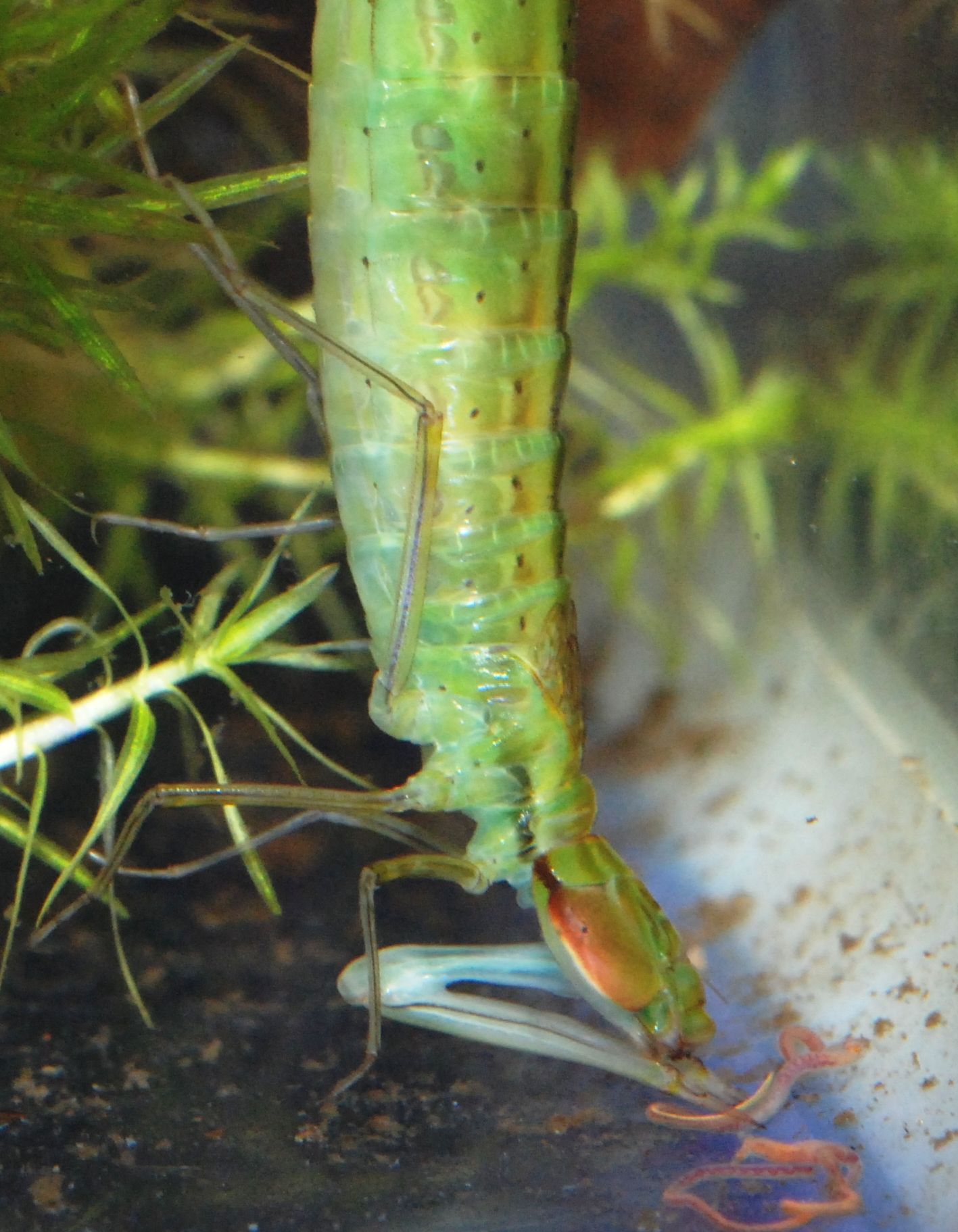 A dragonfly larva extends its lower jaw to capture prey.

Growth habits
Like other insects, dragonfly larvae grow by moulting, becoming bigger with each moult. Depending on the species, a larva goes through 10 to 12 rounds of moulting process. Larvae of different species grow at different rates which is in turn dependent on factors like food availability, habitats and climate. In Singapore, larvae of most common species take about six months to a year to grow.

In countries where there are different seasons, dragonfly larvae will stop growing during winter and enter a state similar to hibernation. Only in the warmer months of spring and summer will they resume growth. In situations like this, scientists have found larvae as old as six years.

Slowly, adult dragonflies will emerge. The process is similar to how a butterfly emerges from a caterpillar pupa. As the dragonfly pumps bodily fluids throughout its body, it will expand and the wings will harden. After a few hours, a complete adult dragonfly is formed and ready for flight. Once the adult flies away, all that is left is the empty skin hanging onto the water plant. A keen observer can sometimes spot these empty skins at a pond. 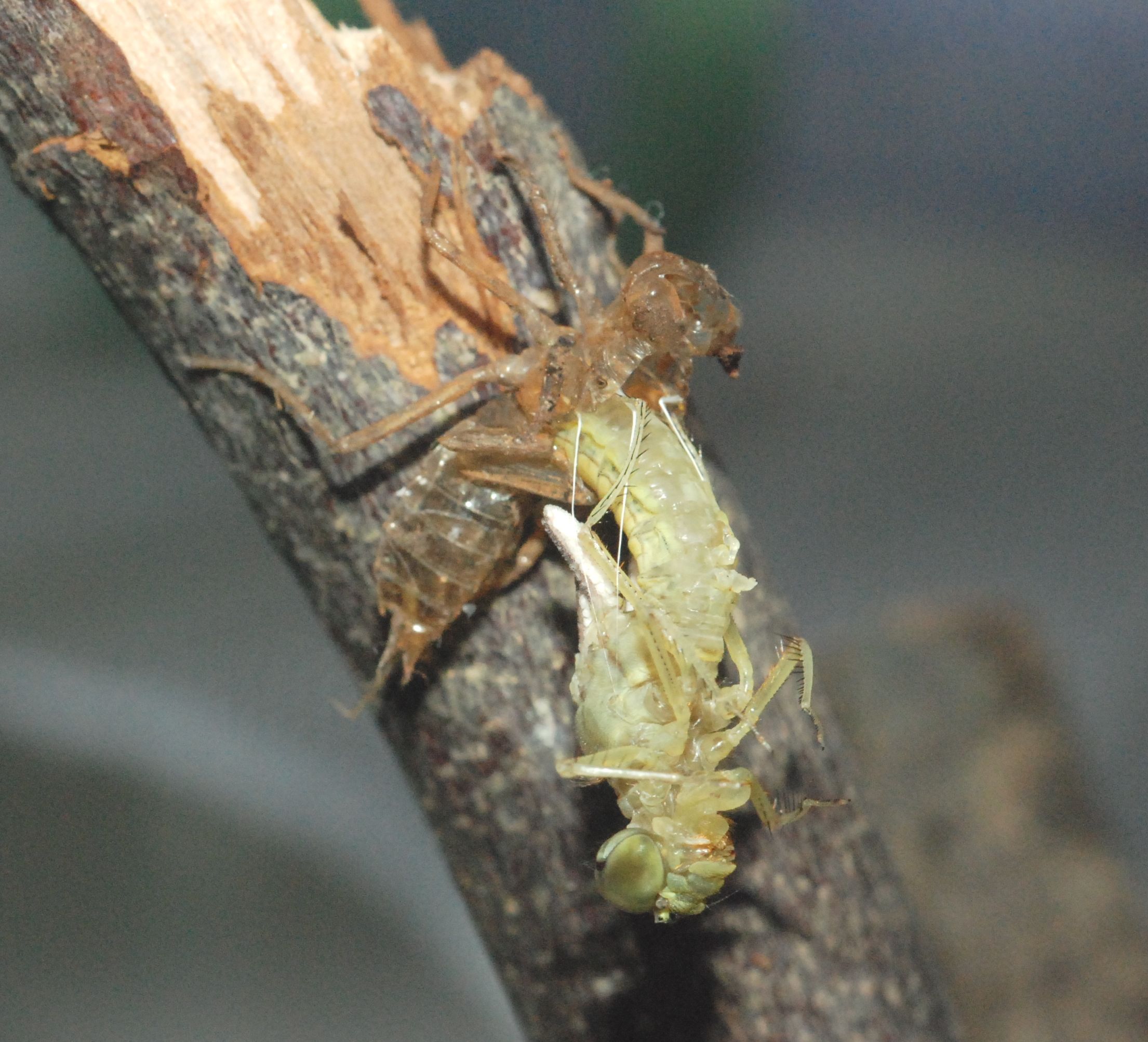 An adult dragonfly slowly emerges from the larval stage.

As dragonfly research continues in Singapore, interesting larvae discoveries have been made. For example, previously unknown larvae of some species have been found and their fascinating ecology recorded. As part of NParks’ outreach programmes, live larvae are frequently used for show and tell, generating delight and intrigue among schoolchildren. With a greater appreciation of the complete life-cycle of dragonflies, we can better protect and ensure the continual survival of these splendid insects.

For more information on the dragonfly or its larvae, search for “dragonfly” or “dragonfly larvae” in BIOME . Navigate the “biodiversity” map to see what species have been sighted and where in Singapore. You may also submit your sightings in BIOME.

Dragonflies of our Parks and Gardens