Coral reefs play an important role in providing coastal protection and people rely on its rich biodiversity for food. Sadly, for hundreds of years, coral reefs have been degraded as a result of over fishing and pollution. More recently, reefs have had to contend with the effects of global warming.

Since its founding, Singapore’s coastline has changed dramatically, with much of the reefs south of the mainland being lost to land reclamation. In addition, Singapore’s reefs are threatened by dredging activities that produce large amounts of sediments that can bury or choke corals.

While coral reefs can easily be damaged, they can also be quite resilient and will recover if given the chance. In some cases, all it takes is for the source of trouble to be removed (for example, controlling fishing activities and removing pollution) and a reef will recover on its own. In other cases, however, it may be necessary to take active measures to assist recovery. This is known as active restoration and has been practised on land for many years.

Helping to regenerate coral reefs
On coral reefs, this typically involves growing coral colonies in a nursery and transplanting them back onto degraded reefs. In most cases, corals are produced by breaking off small pieces from adult colonies and growing them in nurseries. More recently, scientists have been trying to rear corals from eggs and larvae, although the techniques are is still experimental.

Currently, we are trying to see if we can use sexually reared corals in Singapore as a way of restoring coral cover on degraded reefs. For this method to work we have to collect eggs, sperm from spawning coral colonies. Coral spawning happens once a year around April and corals that use this method of reproduction are called broadcast spawners. We mix the eggs and sperm together to allow fertilisation to take place, then rear the embryos in aquarium tanks until they become swimming larvae. Other coral species, known as brooders, do not broadcast spawn, but release fully formed swimming larvae which can be collected directly.

Whatever method is used to rear the larvae, eventually we will settle them on specifically designed substrates, before growing them to a suitable size in an aquarium tank or in a nursery in the sea.

Young corals, however, have a high mortality rate. In nature, most will die within the first few weeks or months after settlement. Many things can kill baby corals including being overgrown by seaweeds, predators such as fish or coral-eating snails, sediment and diseases. 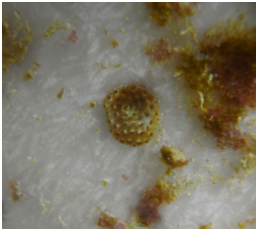 A six-month-old coral from the spawning species Acropora millepora settled on a special wax-based substrate that reduces the amount of algae growing on the tile.

We are now conducting experiments to control the amount of seaweed growth on our substrates using non-toxic antifouling surfaces and studying the effects of excluding potential fish predators. The project lasts for two years and will end in 2014. At the end of the project, we hope to come up with guidelines on the best way to rear large numbers of corals so that we can restore Singapore’s reefs.

By James Guest
Photo was taken by Grace Lo

Dr James Guest is a research fellow at the Centre for Marine Bio-Innovation of the University of New South Wales, Australia and the Advanced Environmental Biotechnology Centre, Nanyang Technological University (NTU), Singapore. He specialises in coral reproductive biology and coral reef restorative practices. The initiative on reproducing corals in the laboratory is a joint collaboration between the National Parks Board and NTU.