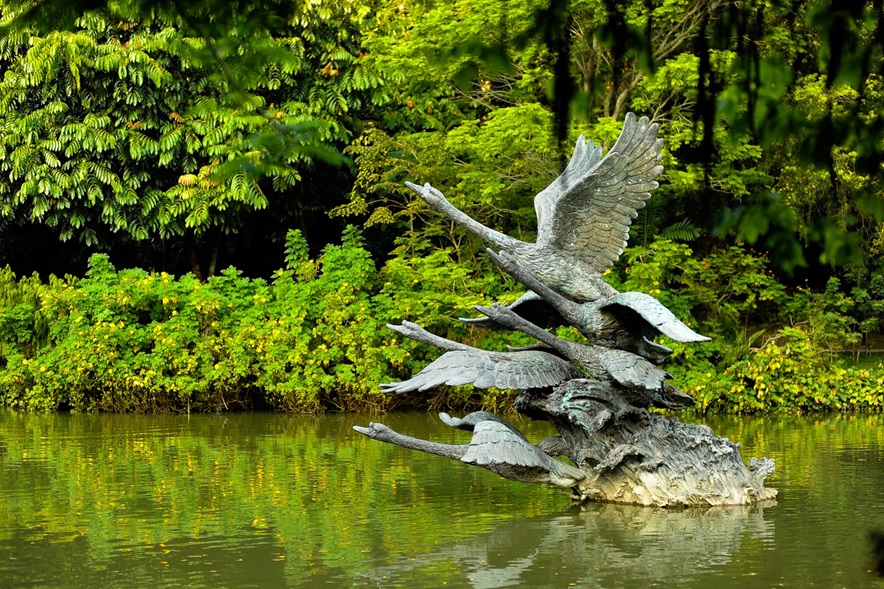 The Swan Lake is a major attraction in the Singapore Botanic Gardens. It was formerly also known as the Main Lake or the First Lake. It was constructed in 1866, shortly after the Gardens formation. It is considered to be the oldest ornamental water-feature in Singapore.

Home to numerous species of aquatic plants and fishes, the lake covers an area of slightly less than 1.5 hectares, with a depth of about 4 metres. The Swan Lake is named as such because of a pair of beautiful mute swans from Amsterdam that glide gracefully across the lake. These swans never fail to thrill visitors.

Another iconic feature of the lake is the island with its large clump of Nibong palms (Oncosperma tigillarium) which were recorded to be planted here in 1891. The Swan Lake also serves as an important water point to supply water for the Gardens’ plants around the Tanglin Core.

Some Interesting Facts Of Swan Lake

In the Gardens’ annual report dated 1892, it was mentioned that a crocodile that had escaped about two years earlier had taken up residency in the Lake despite all efforts of trying to catch it. It became dangerous, having seized one of the coolies while he was drawing water. Following the incident, the Lake was drained off in order to capture and destroy it.  Along with this exercise, the Lake was also thoroughly cleaned for water lilies and other aquatics to be planted.

In 1961, the Swan Lake underwent another draining, to facilitate investigations into the mystery of the complete disappearance of the waterlily population in the Lake. Six herbivorous turtles, Callagur borneoensis (Painted Batagur), were caught and removed as they were the culprits. This subsequently led to the regeneration of Nelumbo and Nymphaea. Even a rare blue Nymphaea last seen flowering in 1953 reappeared at the same planting spot. The regeneration of these aquatic species was believed to come from a rich stock of dormant seeds lying in the mud that finally germinated as a result of the drying and improved aeration.

During the draining of the Swan Lake in 1961, nearly 100 specimens of a predatory fish called Aruan or Giant Snakehead (Channa micropeltes) were caught and distributed to the National University of Singapore, The National Museum, the Van Kleef Aquarium and the Water Department. However the sheer number of the Aruan in the lake made total eradication impossible.